Currency
£
Home » The Man who put a spanner in his works...

The Man who put a spanner in his works... 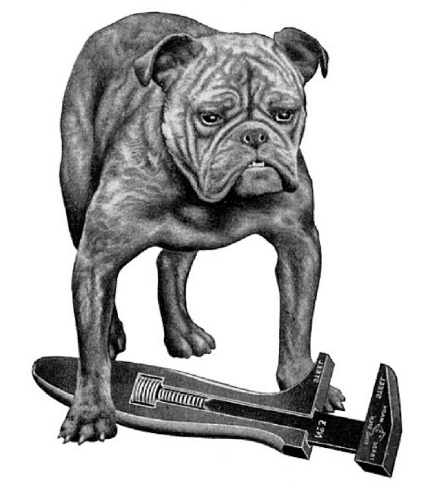 Go back 50 years and there was a little spanner that was quite famous. It adorned just about every car and motorcyle toolkit and many a tradesmans toolbox. The story of the man behind it and how it got its name, is an interesting one.

Thomas Mabbutt was born in Abingdon, Oxfordshire in 1829 to parents who were not formally married, hence he retained his mothers surname. Not much is known about his early life, but it can be assumed it wasn’t a bed of roses as he is recorded on the workhouse register at one point. Just before he entered his teens, the family moved to the British Empires Global Manufacturing Hub, or as it is more commonly known, Birmingham. They went looking for work and legend has it that they walked all the way.

Thomas succeeded in obtaining an apprenticeship to a gunmaker, where he learnt the precision trade and then in 1856, he started his own business and called it ‘Abingdon Works’ after his hometown. The name also conveniently put it at the front of the trade catalogues of the time (fyi younguns, there was a time before search engines when everything was listed alphabetically!). He was in the right place at the right time, as British commitments in the Empire required firearms and the technology was advancing rapidly. The Abingdon Works made ‘Gun Implements’ which are tools for loading, cleaning and maintaining small arms. The little tool company grew and Thomas became comfortably off, but he didn’t forget his humble origins. When the cotton market collapsed, people in Lancashire became destitute and he gave generously to the relief fund as well as other charities, such as those that organised workers 'excursions', which were days out at the weekend to the seaside or other places of interest as a relief to the working week.

The company continued to prosper and by 1861 he employed 25 men and 10 boys. Then America commenced its Civil War and in the years before the US armouries came on stream, Birmingham’s armament manufacturers were kept busy making weapons for both sides in the conflict, which of course meant they needed tools to load and maintain them from the Abingdon Works.

In 1881 the company launched a new type of adjustable spanner. It was small, tough and capable, with a very fine adjustment. Thomas’ hobby was breeding British Bulldogs and he was talented at that too. In line with the the fancy naming of showdogs, his most famous event winner was called 'Abingdon King Dick'. He could think of no better name for his new wrench as it signified ‘The best of the British breed, tough and tenacious’. Dick at that time meant ‘thick and strong’, which is why that great British favourite pudding, Spotted Dick, is spots of currants in a dense, semi-rigid, suet that stands up on its own when tipped from the bowl. It wasn’t until the late 1800’s, some lads in the army started using the term to boast about their private parts and the British have been sniggering over the double entendre ever since. Unless you owned a King Dick tool, because they gained a healthy respect.

In the early 1900’s the company rode the 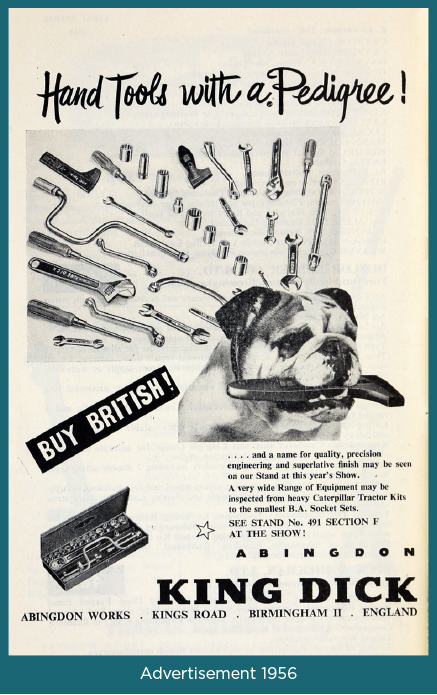 boom in Motorcycles, manufacturing chains, gearboxes, then engines and eventually complete machines sold under the AKD or ‘Abingdon King Dick’ brand. These ceased in the 1930’s. Concentrating on tool making during the Second World War, Abingdon Works decided to focus back on them when the conflict ended and became one of the main hand tool manufacturers in Britain. That little adjustable ‘King Dick’ wrench became quite prolific and graced nearly every car and motorcycle toolkit in the UK until the late sixties. It was even specified by the military for several specialist tasks, with adaptors being made for these unique applications. As vehicle manufacturers dropped supplying toolkits in their vehicles in the 1970’s, King Dick left the consumer market and supplied mainly Industry, so the brand faded from visibility to the general public, only being cherished by those tradesmen ‘in the know’.

Today they are the only manufacturer still producing their spanners and sockets in the UK. They do not try and compete with cheap imports, relying on quality to make them attractive to individuals and companies that require complete dependability. That quality, accuracy and durability is recognised by businesses that know about such things and still feature hand assembly, companies like Aston Martin, Triumph Motorcycles and British Aerospace, who specify them in their R&D departments and/or production lines. Several of the top motorcycle racing teams use them exclusively.

After learning more about the company and testing the products, C&B have decided it's a range we'd like to stock.  We are proud to be appointed a distributor for King Dick Tools to the restoration market and bring this famous British Made brand back to the enthusiasts attention. At a time when most tool manufacturers have dropped Imperial sizes due to reduced demand, with King Dick we are pleased to be able to offer not just metric, not just AF, but Whitworth too. We'll have all the popular sizes in stock and even be able to obtain specials at very short notice.

There is an indescribable pleasure in using a well made tool and as the old saying goes, "You’ll feel good with a King Dick in your hand" (ooh, sorry vicar…)